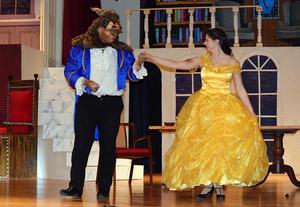 Awards Ceremony Set for Sunday, May 19

In addition, sophomore Luke Whittaker, who played the Young Selfish Prince as well as a villager and castle object, was selected for a Pittsburgh CLO Scholarship.

All nominees will be recognized at the 25th annual Henry Mancini Musical Theatre Awards ceremony at 7 p.m. on Sunday, May 19, at Lincoln Park Performing Arts Center (Midland, Pa.). Tickets are $25 per person.

Keynote speaker will be Christopher Jackson who earned a 2016 Tony Award nomination for his original role as George Washington in “Hamilton.” The awards ceremony will feature performances by each school nominated for Best Musical and those students nominated for individual awards and two representatives from each participating school will join in a “show-stopping” finale number.

Through the sponsorship of the Pittsburgh CLO, the students who win Best Actor and Best Actress will advance to the National High School Musical Theatre Awards (the Jimmy Awards) at Broadway’s Minskoff Theater.