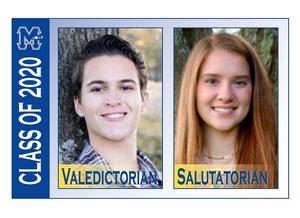 Mars Area graduates Jack Felice and Ashley Edwards were named valedictorian and salutatorian of the Class of 2020, respectively.

As a senior, Felice led the Mars Area High School Marching Band as drum major, and was a section leader for the band during his sophomore and junior years. He also participated in the school’s competitive marching band; was a member of Jazz Band; and was selected to attend the Pennsylvania Music Educators Association (PMEA) District Jazz Festival.

In the community, Felice is in a local band; is an altar server at St. Kilian’s Parish; and has volunteered for several activities sponsored by Mars Area High School Student Council.

Edwards plans to attend the University of Dayton as a chemical engineering major.

For more information on the valedictorian, salutatorian and honors selection process, visit https://highschool.marsk12.org/apps/pages/index.jsp?uREC_ID=808546&type=d&pREC_ID=1189727.