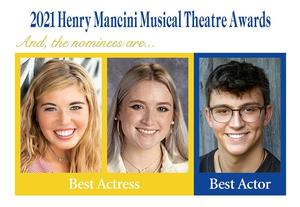 Virtual Ceremony Set for Saturday, May 22 As the COVID-19 Pandemic limited many schools’ efforts to present musical productions during the 2020-2021 School Year, the typical adjudication by a panel of independent judges and award for group categories will no occur. This year’s competition will only include awards for Best Actor and Best Actress.

Through the sponsorship of the Pittsburgh CLO, the students who win Best Actor and Best Actress will advance to the National High School Musical Theatre Awards (the Jimmy Awards), which will be held virtually and broadcast nationwide this summer.