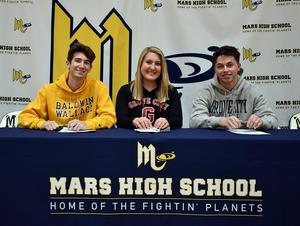 Emily Ivory signed a letter of intent to join the Wolverine’s Women’s Tennis Team at Grove City College, where she plans to major in business/entrepreneurship.

At Mars Area High School, Ivory is a member of Interact Club and Key Club. In the community, she works at Soergel Orchards.

Carson Owens signed a letter of intent to join the Yellowjackets Men’s Volleyball Team at Baldwin-Wallace University (Berea, Ohio), where he plans to major in accounting/business management.

Owens, a four-year letterman on the Mars Area High School Boys Varsity Volleyball Team, is the school’s first boys volleyball player to sign with a college men’s team. This season, he was named a Western Pennsylvania Volleyball Coaches Association Player of the Week.

At Mars Area High School, Owens is the president of Bible Club and the manager for the Girls Varsity Volleyball Team. In the community, he is a two-year member of Boys 18 Exile Volleyball Team, under head coach John Lawrence; and, he volunteers for the World Vision program and participated in the 30-Hour Famine at Valencia Presbyterian Church.

Trent Wick signed a letter of intent to join the Wolverine’s Men’s Soccer Team at Grove City College, where he plans to major in marketing.

Wick is a four-year member and senior captain of the Mars Area High School Boy’s Varsity Soccer Team, which earned both the 2020 PIAA and WPIAL title. He was named to the 2020 All-Section Team and 2020 Butler Eagle Soccer Honor Roll and was selected as a 2019 Pittsburgh Post-Gazette Player of the Week.

At Mars Area High School, Wick is a member of Chess Club and former member of the Fellowship of Christian Athletes. In the community, he works as a leader at Orchard Hill Church’s summer KidsFest.